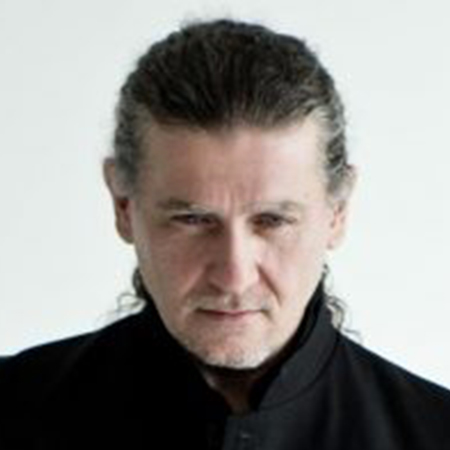 Javier Girotto's Italian adventure begins at the age of 25, deciding in a short time to start his professional career in this country. His collaboration ranged from commercial music to Latin groups and also with the formation of several jazz groups, with which he began his tireless activity as composer and arranger. His first Roman (italian) formation was "Tercer Mundo" ("Third World"), together with Horacio "El Negro" Hernandez, on the tracks of Latin jazz, followed by "Six Sax", a quartet of saxophones, with bass and drums, composed by Rosario Giuliani and Tony Germani on alto sax, Gianni Savelli on tenor, Javier on baritone, Marco Siniscalco on bass and Pietro Iodice on drums, with whom he recorded his first CD "Homenaje" in 1995 with special guest Bob Mintzer and Randy Brecker.

In this same period the group, for which Girotto's soprano and baritone sax are best known, was born: Aires Tango, with Alessandro Gwis on piano, Marco Siniscalco on bass and Michele Rabbia on drums and percussion, in a combination of the reasons for tango with those of jazz that, starting from the pleasure linked to the listening of Argentinean music style, reassures the listener into facing the "rapids" of the "diversity" of his solos. With "Aires Tango" he recorded 10 records and in 2009 they celebrated 15 years of life with their album "10/15" (precisely to indicate 10th record and 15 years of the group's life) treasures of a path in which Girotto was always accompanied by the unconditional acclaim of the public, which encouraged him to "open" the project to the voice of Peppe Servillo and the symphony orchestra. In 1999 another group was formed, "Cordoba Reunion", formed by four musicians from Cordoba, Javier Girotto on sax and flutes, Gerardo Di Giusto on piano, Minino Garay on percussion and Carlos El Tero Buschini on bass, engaged in a project with which he returns to the roots of his music, with an eye to those times that preceded the tango, dragging the listener on an empathetic and emotional journey in search of the rhythms of Argentine folklore such as milonga, chacarera, zamba and candombe, group, and is all this put together that later allowed him to sign a first record with the singer Mercedes Sosa.

He has played and still plays in the most important Italian jazz festivals, theaters, exhibitions and clubs.