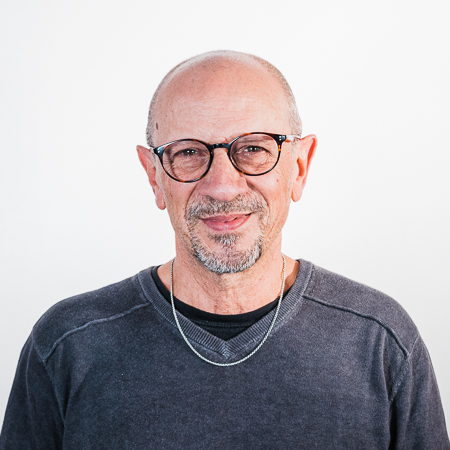 Musician and teacher graduated in jazz at the L. Refice Conservatory in Frosinone (I and II cycle). Professor and coordinator of didactics for Harmony studies courses , Jazz Piano, Piano and Keyboards at Saint Louis College of Music, in which he is also a member of the Academic Council.

The teaching activity goes alongside the concert activity. Since 1988 he's taken part of the ten-year collaboration with guitarist Francesco Bruno, with whom in addition to performing live on Italian and foreign tours, he made in 1992 "El Lugar", the album also released abroad by the "Prestige" records, which included the presence of the American rock star Richie Havens; in 1997 as pianist, keyboardist and co-arranger of the album "Ouarzazat" recorded with Agostino Marangolo and Gigi De Rienzo; in 1999 "Matarièh"; in 2002 "Jamila" with the collaboration of "Agricantus" in favor of gino Strada's Emergency project, in 2003 "Huacapù", in 2008 "Le Parole Altre. The Long Journey by Tiziano Terzani" CD+DVD, with Enzo Pietropaoli and Javier Girotto, inspired by the life of Tiziano Terzani, in 2014 "Witam", with the participation of Piotr Vojtasik and Sylwester Ostrowski and in 2020 "Blue Sky Above the Dreamer" for the Helvetia label.

During the autumn of 1996 he collaborated in the realization (arrangements and performance) of the soundtrack of the musical "Tano da Morire" by Roberta Torre (foreign criticism award for music).

It is also important to recall the wide experience with the "world music" of the French Bohé Combo with whom he performed, alongside accordionist Antonello Salis and Richard Bona (Zawinul Synd. Pat Metheny group and Steps Ahead), on an Italian tour for the presentation of the album "Follow the Trace".
In Italy, the fun collaboration with the singer Paolo Belli, with whom he also recorded, in '93, the homonymous album and participated in some tours.
In the winter between '93/'94 he took part in the tour of the trumpeter Nini Rosso, with whom he performs in theaters in the major cities of Japan.

In 1998 he joined the jazz big band M.J. Urkestra conducted by Roberto Spadoni, with whom he recorded the album "Dances" in 2002.
In 2001 he began his collaboration with Agostino Marangolo, joining his group that performed live in the major Italian clubs and jazz-festivals, and with whom he recorded in 2001 the album "Day by day" and in 2004 "Avant le desert".
Some interesting theatrical experiences such as "Al Tabou de Saint Germain de Prés" by G. Clementi with Daniela Giordano should be highlighted; "The Nights of Kabiria" with Chiara Noschese; Show of Songs ("Spettacolo di Canzoni") by Alessandro Haber, with whom he participated in the "Premio Luigi Tenco" in 2004.

At the end of 2005 he collaborated with violinist Nino Cannavacciuolo for a series of concerts.
In autumn 2006 he collaborated on the film "Piano solo" by Riccardo Milani, about the life of pianist Luca Flores, as a trainer for the main actor Kim Rossi Stuart and as a musical consultant regarding to piano and group performances.
In September 2008 he recorded the music of the musical "Hairspray" that was later performed in September 30, 2008 at the Sistine Theater in Rome.

During his career he has cultivated his deep passion for jazz, holding concerts in numerous Italian and foreign Festivals and Jazz Clubs with different formations also under his own name.
Also important the numerous live performances in television broadcasts including "D.O.C." and "Segnali di fumo" with Francesco Bruno, "Roxy Bar" with Jovanotti and Paolo Belli, "Ieri Goggi e domani" with Sergio Caputo and others.
From 2001 to 2006 he played continuously on the summer tours of the vocal group "Neri Per Caso".

He is also part of the Latin Big Band "Mambo Puente Orquesta" by Elvio Ghigliordini. Numerous appearances in international Jazz Contest juries such as those organized in 2010-2011 and 2012 by Saint Louis or the "International Piano Competition" of Roland Italy organized in Milan in September 2007.